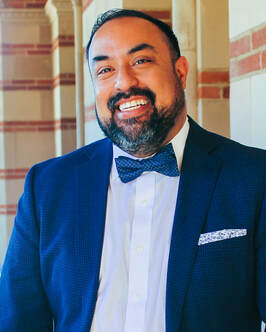 Robert Gamboa graduated from the University of Texas at Austin with a Bachelor of Business Administration degree in Management Information Systems in 1999. He worked in software and financial companies before moving to California in 2001. Starting in 2009, Gamboa began working on social justice issues for the LGBTQ community ranging from marriage equality, anti-discrimination, substance abuse, mental health, homelessness, asylum, immigration and so much more. This led to being appointed as a city official for the City of West Hollywood in 2012 where he currently sits on the Lesbian and Gay Advisory Board- serving as co-chair twice. In September 2017, Gamboa started at the UCLA Luskin School of Public Affairs as a Master Candidate for Public Policy with a focus on LGBTQ policy. Gamboa also serves the UCLA Graduate Student Association as Director of LGBT+ Affairs and is also the chair, for the 2nd consecutive year, of UCLA's Committee on LGBTQ Affairs (the UCLA Chancellor's Advisory Committee).